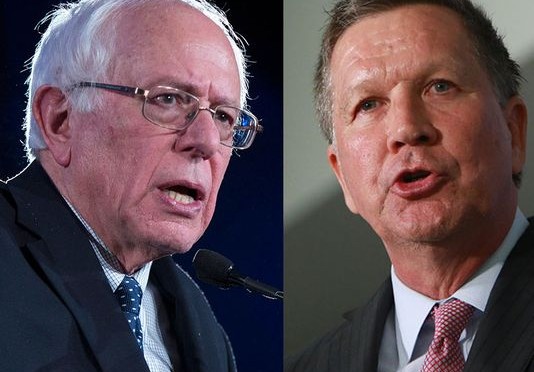 Some have compared this presidential election cycle to a rash of pimples. An ugly display of candidate acne, that simply will not go away and seems to be unaffected by high doses of medicine.

Bernie Sanders has been clogging Hillary Clinton’s pores for months now. Hillary expected to be coroneted by this point with a well-orchestrated uncompetitive field put together by the Democratic National Committee and Mrs. Debbie Wasserman-Shultz. Who knew that the Democratic Party would love a socialist over the Clinton machine let alone Hillary? Bernie is one blackhead that won’t go away. Hillary has a big Bernie Blackhead on her left cheek that she feels every time she sits down and listens to him rail against her Wall Street ties and fossil fuel industry backers. As for Bernie, Clinton is like a big whitehead on the tip of his nose. He knows it is there, he feels it but because his eyesight is so bad he doesn’t see it until a Clinton aide says “hey Bernie, where did you get the big zit?” It’s all fun and games until Bernie responds with, “I got it in Harlem looking at the Clinton Foundation books. Yeah, when I saw that less than 10% of money raised went to charities and Haiti only got a Honda generator for the Presidential Palace, I realized Al Sharpton ran a legitimate charity too.”

On the republican side, John Kasich inherited his Dad’s bad acne from carrying a mailbag. John’s acne is mostly centered on the right shoulder, neck and face. Clearasil helped in the early years but the scars remain. Ted’s acne started in 5th grade. It began to develop as a reaction to worrying so much about getting pelted repeatedly in Dodge ball during gym classes. By the time he was in 7th grade, we had a five alarm fire in regards to acne nodules on his chest, back and face. Ted’s parents bought the best medicines available in Canada but nothing seemed to work. Ted finally out grew the acne when high school started and gym class became an elective and Ted chose non-athletic classes like Calculus and Constitutional Law  as his electives. Donald was fortunate in that he had only minor bouts with acne and in his case; his acne was always hidden behind his clothing. You see, Rubio had inside information about Donald and apparently, “he has a problem down there.” Acne where you least want it, least can afford to have it as a vibrant young man and if it word ever got out, lots of jokes, many, many, many jokes. Fortunately for Donald, money and age helped him grow out it and as he has publicly stated recently, “trust me, there is no problem down there.”

Well, we have about seven more months of pimple politics. We’ll see a lot more zits in the coming months. Have your Clearasil, Nitrogena and cleansing soap at the ready. Lots of whiteheads and blackheads to come your way, stay tuned and enjoy!

One thought on “Pimple”