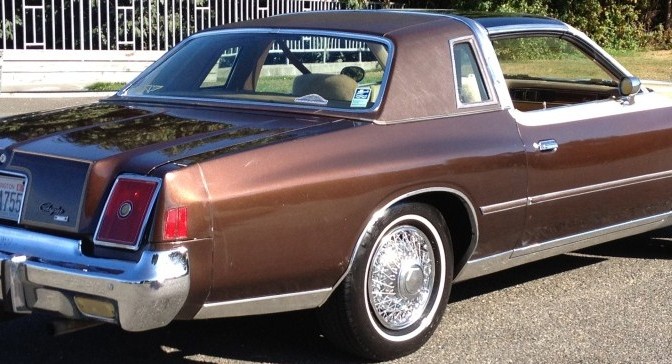 Elegant, stylish or a car top hairpiece, the Landau Top was a sign of the times. In the 1970’s, the vinyl top added panache to many Fords, Chryslers and GM cars. You could pick largely from two styles, the Landau which covered about a third of the roofline or the canopy that covered the whole roof. Two door coupes usually had the Landau top and four doors usually sported the canopy version. Chrysler even had a version called “the Up and Over” which put fish gills over the back windows on their coupes. Can you picture those 1970 era Ricardo Montalban Chrysler Cordoba commercials? When I think of the Landau top, the Cordoba is one of the first cars I think of followed by a Cadillac Deville or a Lincoln Continental.

The Landau fit the decade of the 70’s and into the first few years of the 1980’s. Disco, silk shirts, bell-bottom jeans and the Landau top all seem to fit together. Even Toyota and Nissan started importing their cars sporting the hairpiece. Many Toyota Celica’s could be found sporting a version of the canopy top.

The 1970’s were a great decade of invention. This decade includes the Sony Walkman, the Apple Computer, the digital camera, the digital watch and the Atari game system. Many great bands got their start; the Eagles, Electric Light Orchestra, Billy Joel, Bruce Springsteen and the E Street Ban, Bob Seger and the Silver Bullet Band and Kiss. But, can you picture the 70’s without the Landau top sporting around on America’s highways? The Landau Top made the cars of the 70’s!

Ask a teenager today about the Landau Top and they would likely be lost, puzzled or give you a quizzical look about what it is. They may even think it is an App. Understandable. The Landau is a lost part of America’s automotive landscape  unless you happen to see a classic automobile sporting one. It could be time for the Landau Top to make a comeback. Can you picture a Chrysler 200, Ford Fusion or Buick Regal sporting the Landau Top? It may be time to bring back America’s automotive hairpiece, the Landau Top. I know some dudes in Leisure Suits that would pay top dollar for a Landau.