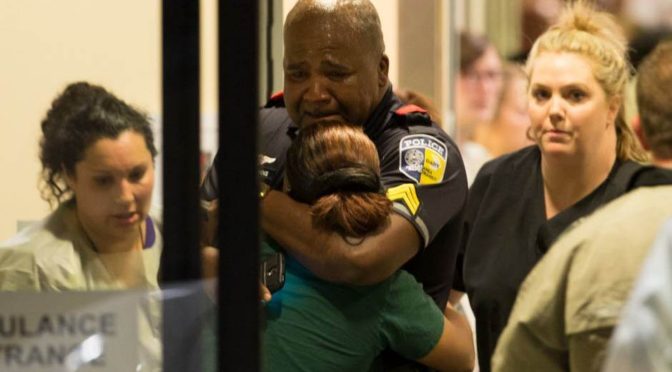 (Dateline 8 July 2016) The Ferguson Effect in combination with the poor command climate established by this administration and President Barack Obama has created a toxic environment where police officers are under attack by fellow Americans. How did this happen? How far have we fallen? This administration once again focuses on their agenda and not the lives of our citizens.

The Rule of Law is under assault in every corner of America. Those who protect us day-in-and-day-out are under attack and instead of this president having their back, he has questioned and accused police departments of institutional racism from isolated incidents. This week Secretary Clinton was somehow not indicted for breaking numerous laws, coincidence of a Tarmac meeting between the DoJ Loretta Lynch and President Bill Clinton. The elite are protected and the average citizen would have already been in jail if we did what Clinton did.

Americans are saddened, bewildered and shocked at what is happening to our country. There is no respite Ā from the liberal-progressive assault on tradional values, respect for law and order andĀ support for those wearing blue.

Pray for our fallen, pray for our country and pray that America finds her way with the silent majority restoring our way of life.

(Dateline April 2016) Arguably the left and the Democratic Party have always excelled at organizing the masses for various causes, some real and many manufactured. During the Obama years, manufactured movements (#MobRule) have been put on hyper drive and the go-to methodology for fabricating issues and enacting policies to control the masses and bring forth more regulation and taxes on businesses. What many people on the left fail to understand, or they are perfectly fine with, is that our government is gradually removing individual freedoms and replacing our freedoms with dictates, oppressive regulations and surveillance instruments to monitor our adherence. Letās look at a few examples.

The governors of New York and California have recently passed laws to enact a mandatory $15 Minimum Wage law. So much for free market capitalism, supply and demand practices and Adam Smithās invisible hand. These type laws are not only un-American, they are a reflection of how far a once vibrant US economy has fallen in the last two decades, especially during the Obama years. We are now replacing skilled and manufacturing jobs with $15 dollar fast food restaurant jobs and other entry-level jobs. This is the best the left and Democrats can offer? Think about it, instead of creating the economic conditions for businesses to thrive and prosper through lower regulation and lower taxes, they will inevitably chase employers away with these job-killing policies. These so called āliving wageā laws define a lack of understanding in basic economic principles and really serve the Lefts own agenda of manufacturing causes for low information masses to help their own re-election campaigns and makeĀ payouts to their special interests.

The Occupy Wall Street movement was another convenient movement for the left and the Democratic Party to manipulate the masses and spew their anti-capitalism message to the low information voters and of course blame American big business, banks and Wall Street for all of Americaās woes. When American states and cities led by Democratic Governors and Mayors are imploding with excessive debt, poor services and corruption, America as a whole is left with this carnage while the Demons blame others and assign scapegoats.Ā They fail to ever think about holding themselves accountable for misappropriation of taxpayer funding, poor decision making or failure to maintain and live within a budget. This would be asking too much. Blame the 1%ers, the doers, the job creators; they are to blame for what is wrong with America. It was also very convenient how the Occupy Wall Street Movement coincided with President Obamaās re-election campaign beginning in November 2011. Hmmm. I guess all the 99%er problems must be solved now because Occupy Wall Street is no more and not in the news, they have moved on to the next movement, #BlackLivesMatter. Always a new cause to create, manufacture and give the willing media accomplices something to run with.

It doesnāt matter that the Police Officer that shot Michael Brown in self defense, whom was thoroughly investigated and found innocent by several investigations including the FBI, Department of Justice, and a local trial. What matters is the political and media narrative about Black Lives Matter, as if they do not (insulting by the race baiting crowd!). A false narrative that continues to be embraced today drove the riots initiated by mob rule in Ferguson, Missouri. Fact — the white police officer has been found innocent of any wrong doing against the black youth, Michael Brown whoĀ physically attacked him. From this false narrative, we have #BlackLivesMatter. Well, the busloads of protesters now being transported from city to city for various causes to include #BlackLivesMatter, I trust that Democratic Party backers are paying them the new $15 minimum wage standard for various manufactured protests? I would hope so as it is difficult to generate false passion about a plurality of causes. However, they have mastered the art of disruption and fabricating causes for the media circus.

My challenge to #BlackLivesMatter, park your asses in Chicago and demand safety and increased police presence for citizen safety.Ā To date for 2016, 110 blacks have been gunned down and murdered in the city of Chicago alone. This is unacceptable!Ā Stop being political stooges for the Democratic Party and put your energy and time into making a real difference. This is insane and outrageous. Every American deserves to live in a crime free environment where safety and security is paramount. Demand it, protest for it, lead it, and do something about it! #MobRule needs to end!

Let us know if you liked the post. Thatās the only way we can improve.
Share your vote!

One thought on “#MobRule – Pray for Dallas”